On March 12, a group of activists disrupted a Habitat for Humanity symposium on “Affordable Housing” featuring Marc Lamont Hill with a banner that read “Habitat Gentrifies!” They rushed the stage chanting “Habitat gentrifies, don’t believe the bankers lies!” A speech was read until eight security guards came to escort the three off the stage.

Hill is a professor, journalist, and career activist. He rose to fame as an analyst for both Fox News and CNN. He pays lip service to being anti-gentrification and pro-Palestine, but his true interests lie in furthering his career.

Habitat for Humanity is a Christian charity that was founded in 1976 by Milliard and Linda Fuller. Their modus operandi is based on turning former renters into homeowners by enlisting volunteers to build homes in working class neighborhoods. Through the donations they receive they can provide a subsidized mortgage payment for their future residents. Those who seek to qualify for a home mortgage with zero down payment and zero interest must put in 500 hours of “sweat equity” with their mortgage totaling thirty percent of a families income.

Nationwide, those who rent spend thirty percent of their income towards housing. Even though Habitat claims their mortgage rate is more affordable than average rent, it’s roughly still the same.

“The activists disrupted Habitat because [it helps] gentrify working class neighborhoods by helping turn former renters into homeowners,” a spokesperson with Serve the People Charlotte (STP-C) said. “Their board is also made up of former Wells Fargo and Bank of America executives who helped usher in the housing crisis of 2008.”

According to a study done by ProPublica, in 2010 Habitat was commissioned to renovate a dilapidated housing project on Madison St in Bedford-Stuyvesant, a working-class neighborhood in New York City. Habitat went on to purchase an occupied apartment complex with the help of its parasite landlord. The federal grant of $21 million being too large to turn down, the landlord incentivized the residents of this project to move into new apartments for six months free of rent. As to be expected, after the six months were up the residents could not longer afford the apartment they were forced into and multiple families ended up homeless.

A STP member discussed Habitat’s effect on Charlotte and their impact. “Habitat for Humanity has a large presence in Charlotte, they are seeking to grow it. In the process of growth, they will build homes in renters areas aiding the developers and bankers in gentrifying this city. The working class in Charlotte are already being pushed to the edge of the city. With the developers we can clearly see their parasitism, but Habitat’s is hidden behind their NGO façade, that’s why its equally important to attack all enemies of our class regardless of the face they put on.”

STP-C went on to say that they expected Hill to be on board with the demands to cut ties with Habitat since he is an activist who cares about the Black working class and Palestine. Instead he made sneering remarks saying, “You can start with an email. You ain’t gotta go right to protest.” 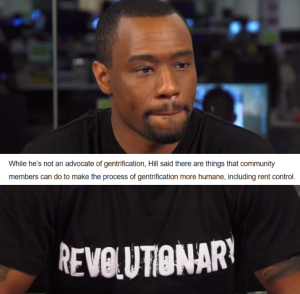 Hill’s remarks only got worse as he went on. “I am gentrifier,” he said, adding that “we” all need to work together to make gentrification more “humane.”  If it wasn’t clear before what roles careerists and nongovernmental organizations (NGOs) play against the revolutionary struggle, Hill’s tone-deaf response should shine a damning bright light.

The fight against gentrification cannot spare NGOs and nonprofits complicit in the schemes of developers. These entities have proven to be even more effective than traditional agents of gentrification since they can mask being parasites with an altruistic grin.

Organizations such as Habitat serve the bourgeoisie just like developers. Their work is even more insidious since they front as being for “affordable housing” and a “just society.” In reality, Habitat for Humanity is a scam and a gentrifying group that should be treated as such.