On June 30, 1892, steelworkers in Homestead, Pennsylvania began a massive strike that would culminate with a full-scale battle at the Homestead Steel Works, owned by the Carnegie Steel Company. The workers were organized under the Amalgamated Association of Iron and Steel Workers, a national trade union, although the union’s membership was only for skilled craftsmen.

Production at the mill was increasing due to new technological advances, but management was still trying to cut wages to make even more profit. General manager Henry C. Frick resolved to crush the union when their contracts expired in 1892.

Andrew Carnegie, the owner of the steel company, tried to wear a progressive mask publicly as a philanthropist, but of course he acted in the interest of his investments and the capitalist class. He encouraged Frick every step of the way to defeat the Amalgamated Association.

The union’s gains were held in place by legal contract, which had the severe limitations of expiring after a set amount of time and only being propped up by the bourgeois courts. Taking up a strictly legal front against management means fighting them on their terms, as the courts are always controlled by the ruling class.

In February 1892, the union and management opened contract negotiations, the contract was set to expire with July 1 as the deadline. Frick demanded serious wage cuts, which the union would not accept. Negotiations went nowhere from February through June and on June 29, Frick closed the Carnegie Steel plant, locking out the workers.

Fearing the organized workers, management created what was nicknamed “Fort Frick,” a tall wooden fence topped with barbed wire, spotlights, and sniper positions was installed. At the same time, the company ran a large hiring campaign to bring in scabs to run the fortified mill.

What followed was a highly organized mobilization of over six thousand workers. Leadership was centralized with the formation of the union’s Strike Committee; they carried out pickets and gathered the support of the surrounding town. Using the network of Amalgamated Association offices, they monitored the company’s activity to stay informed of their plans. 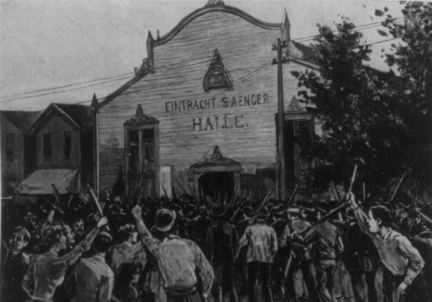 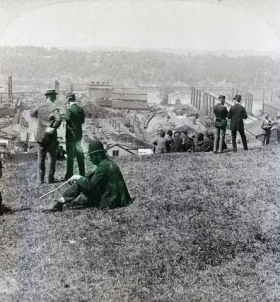 Striking workers watching over the mill from the hillside

On July 5, Frick himself had formally requested assistance from the Sheriff to get the mill running again, and eleven deputies went into Homestead to put up flyers ordering the workers to stop. It was a meager and pitiful attempt by the police to pacify the masses, who boldly tore down the flyers and forced the deputies out of town.

Carnegie Steel hired three hundred agents from the Pinkerton private security company to break the strike. After intercepting management’s plans, workers formed units to patrol the Monongahela River by boat. Armed with rifles and revolvers, the Pinkertons attempted to land early in the morning on July, however scouts on the workers’ side spotted them coming and passed word to Homestead to prepare for the invasion.

The organized workers met the hired guns of the capitalists at the plant, armed and ready to fight, backed up by their families and people from the town. Shooting broke out between workers and Pinkertons; workers built ramparts out of scrap metal and took up positions inside the mill to continue the fight. At one point, workers even sent a burning railcar speeding down a steep hill at them.

Seven workers and three Pinkertons were killed in the battle; many were wounded on both sides, including the Pinkerton captain. As news of the battle at the mill spread, hundreds of Pittsburgh steelworkers came out in solidarity to support the strikers in Homestead.

Overwhelmed, the Pinkertons surrendered, the workers captured them and took them off the steel mill grounds. The workers demanded the agents be charged with murder, but when they handed them over to the police on July 7, they immediately let the agents go without charges, further demonstrating their role as tools of the ruling class.

Meanwhile, the union went behind the workers’ backs and contacted management to negotiate a truce, but Frick declined. The strike was effectively ended when eight thousand National Guard troops arrived on July 12 to take back both the mill and the town from the workers. The soldiers dispersed strikers from the mill property and protected Frick’s newly hired strikebreakers.

Some workers were still willing to fight in the face of this immense repression, and even returned to stop the furnaces from being relit. The soldiers attacked with bayonets, injuring several workers and the plant resumed operation on July 15. Although the Amalgamated Association continued the strike until November, at least in words, it made no difference at that point. Over the following decade, wages dropped and shifts grew longer, according to Carnegie and Frick’s plan. The Amalgamated Association’s membership and resources dwindled until it collapsed.

The spirit of rebellion of the Homestead steelworkers came from a desire for emancipation, and while the strike alone could not achieve this, it is a valuable tool for struggle. A strike unites workers in a common fight and can inspire others to rise up, but the working class must go beyond individual strikes.

Before union leadership capitulated, their fight could only take the workers so far. There would have been another contract with more compromises, and the fight would have been kicked down the road for another three years. In order for the working class to triumph over capitalism, it must organize not just for a short-term contract, but for the ultimate goal: the conquest of power.