Photo: Residents of the Quad apartment complexes in the Riverside area posted their grievances to the front doors of the leasing office

Today, large sheets of cardboard with grievances from tenants of the Quad (formerly Ballpark) apartment complexes were found posted on the glass doors of Quad East leasing office, where property management for the East, West, and South complexes are housed. All around the entrance to the office and the gates into the complex, flyers were scattered pushing tenants to organize the fight for acceptable living conditions. 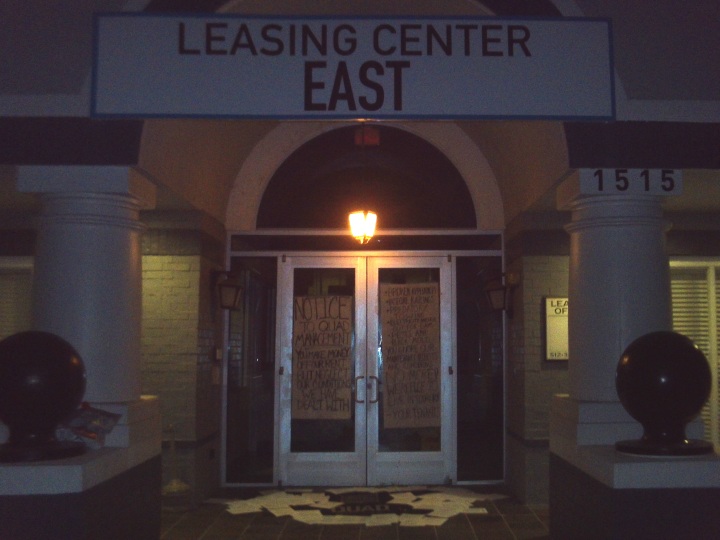 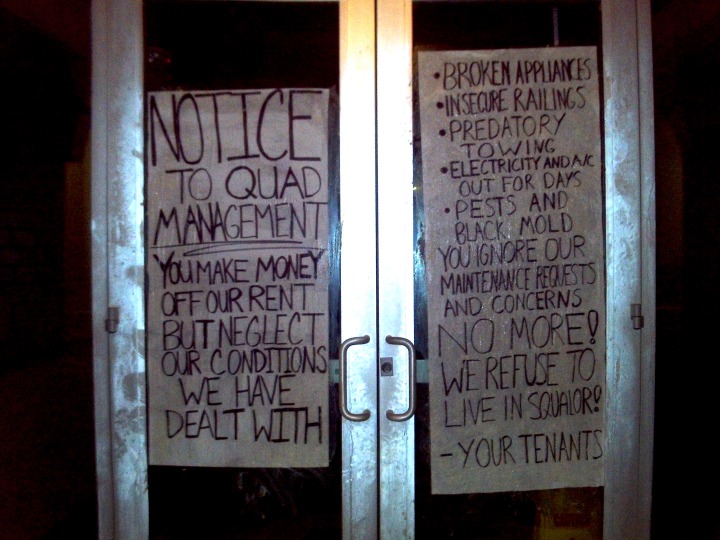 Quad East, West, and South are three of the five complexes that Presidium Group and other developers are trying to turn into a luxury development originally pitched as the “Domain on Riverside,” named after a luxury shopping area in another part of the city.

Management has been known for neglecting tenants’ concerns for a long time and the tenants are clearly fed up and organizing to strike back.

The main statement to management reads:

“NOTICE TO QUAD MANAGEMENT: You make money off our rent but neglect our conditions. We have dealt with broken appliances, insecure railings, predatory towing, electricity and A/C out for days, pests, and black mold. You ignore our maintenance requests and concerns. No more! We refuse to live in squalor! – Your tenants.”

The flyer, which is addressed to tenants specifically, elaborates on some of the concerns residents have, including safety hazards such as dryers that produce smoke like they are going to catch fire and railings on the second and third floors that are not secured properly, posing a serious risk of injury. The flyer also calls on tenants to unite and fight back against property management for their negligence.

The action comes the day before the Austin City Council is set to meet and discuss the rezoning application for the properties, which would allow the Presidium Group to destroy 1,400 low-cost units across the Quad, Ballpark North, and Towne Lake apartment complexes. During a work session yesterday, Mayor Steve Adler expressed concern about disruptions at previous rezoning hearings from “those hoodz folks,” a reference to revolutionary organization Defend Our Hoodz, who have led the opposition along with tenants against the gentrification of the Riverside area and displacement of residents. If the past is any indication, tenants and activists will not be silent in the face of gentrification and oppose the “Domain on Riverside” without regard for the Council’s “ordinary rules of decorum” that Adler so wishes to maintain.