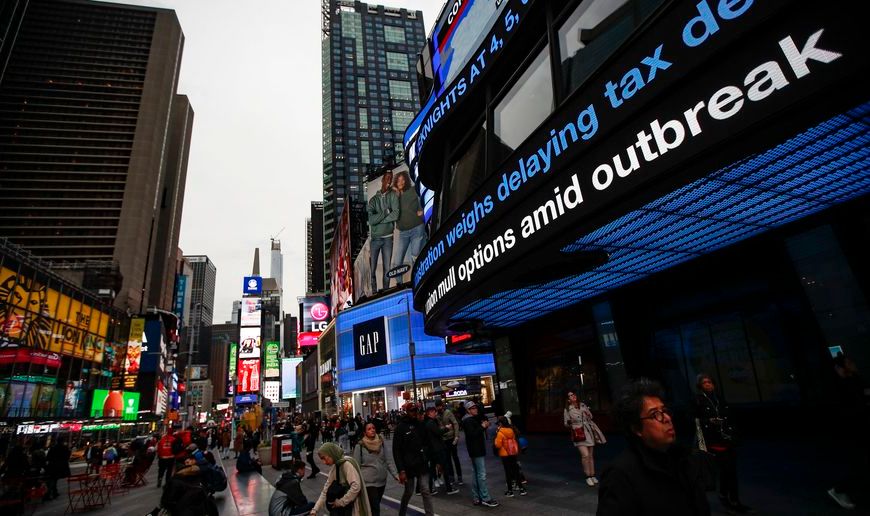 Photo: Pedestrians in New York City pass under headlines in Times Square related to the coronavirus outbreak. Read Tribune of the People’s response to this article here. By the Incendiary Editorial Board Last week, the World Health Organization (WHO) officially declared that the novel coronavirus (COVID-19) that originated in Wuhan, China has become a pandemic, meaning that it has spread worldwide. The economic impact on … END_OF_DOCUMENT_TOKEN_TO_BE_REPLACED

Photo: Thousands of nurses and other healthcare workers went on strike to improve staffing levels and patient care at Swedish Medical Center in Seattle. By Audrey Hellenbrecht Last month, striking nurses at the Swedish Medical Center (SMC) in Seattle, Washington were finally able to return to work after thousands were locked out at the end of a three-day strike. Over 7,800 nurses and other healthcare … END_OF_DOCUMENT_TOKEN_TO_BE_REPLACED

Photo: Stock brokers panic at the New York Stock Exchange as coronavirus fears cause stock values to plummet  By Mike Talavera The New York Stock Exchange (NYSE) has had its worst week since the Great Recession of 2008. Traders have been frantically selling off their shares, causing values to plummet, out of fear of that the coronavirus is on the verge of becoming a pandemic. … END_OF_DOCUMENT_TOKEN_TO_BE_REPLACED

A screenshot of a viewer developed by Northeastern University’s modeling lab showing the spread of the coronavirus. Small dots represent population centers. By Lois Boite The December 2019 coronavirus outbreak has placed strain on international public health, with over 37,000 reported cases of the virus detected in 28 different countries. Coronaviruses are a class of virus that can infect both humans and animals with symptoms … END_OF_DOCUMENT_TOKEN_TO_BE_REPLACED

Photo: Measles, Mumps, and Rubella Vaccine By Manuela Smith For the first time since 1999, Travis County, which includes Austin, Texas and surrounding suburbs, has had a confirmed case of measles. The patient, who became ill on December 14, had visited several Austin-area restaurants and stores since contracting the disease in Europe in late November, prompting fears of a major outbreak. Even before this confirmed … END_OF_DOCUMENT_TOKEN_TO_BE_REPLACED

Photo: Ohio Valley Medical Complex in Wheeling, West Virginia By Mario Ginesta Activists in Wheeling, WV have been organizing around the recent closures of several hospitals in the Ohio Valley region. The closures have resulted in over 1,000 workers being laid off and has limited the already scarce medical and mental health treatment options for people living in the area. The past two months have … END_OF_DOCUMENT_TOKEN_TO_BE_REPLACED

Photo: Healthcare workers surround Mexican President Andrés Manuel López Obrador in Tlacolula de Matamoros, protesting their unjustified dismissal and demanding reinstatement By Ed Dalton Revolutionaries from Current of the People Red Sun (Sol Rojo), confirmed in a general alert that the Government of Oaxaca, the States Attorney General’s Office, and the Judicial Power of the State of Oaxaca have initiated new and deceptive attacks against … END_OF_DOCUMENT_TOKEN_TO_BE_REPLACED