In Washington D.C. this Sunday, hundreds of the masses surrounded a small group of reactionary bigots, neo-nazis, and fascists at the Unite the Right 2 event, a sequel to the rally in Charlottesville last year when white supremacist James Alex Fields, Jr. killed anti-fascist martyr Heather Heyer and injured 19 others with his car. In Charlottesville this year, the masses faced off with the police at the corner of 4th and Main streets where a memorial for Heyer had been fashioned, and at least four protesters were arrested.

In a statement on Facebook, organizers with the progressive activist coalition Shut It Down DC declared victory against white supremacist Jason Kessler and his couple dozen supporters. “Today, we proved we can create a world where white supremacists must either hide or leave, because we refuse to allow space for their violent and hateful views. As one speaker at our rally said today, all stigmas are bad– except stigmatizing fascism,” the post said.

While the counter protest successfully denounced racism and fascism with speeches and performances, Kessler and others still had an opportunity to preach white supremacy to news cameras thanks to a sizeable police barricade. D.C. city officials asserted at a press conference last Thursday that they intended to devote whatever resources necessary to allow UTR 2 to unroll peacefully.

“While we oppose adamantly the message we will hear, it is our duty to protect the First Amendment,” D.C. Mayor Muriel Bowser said at the press conference.

The City of D.C. did not stop at police protection. According to several eyewitnesses, the Washington Metropolitan Area Transportation Authority gave UTR 2 attendees safe passage to and from the event, contradicting previous statements that they wouldn’t do so. Some transportation workers did, however, refuse to participate in the Metro’s facilitation of the rally and abandoned their posts.

Even though there were no known nazis or fascists roaming the streets in Charlottesville this August 12th, the city and state locked down the downtown area with barricades, checkpoints, and riot police. Outside of downtown, city parks, pools, and the city marketplace were also closed for the weekend. The University of Virginia blocked off access to certain outdoor areas for the weekend, including the grounds surrounding the Robert E. Lee statue where fascists brutalized a small group of anti-racist protesters last year after a torch march.

The parallels between the occupations last year and this year were not lost on the masses. At a student protest on Saturday, a large banner read, “Last year they came with torches. This year they come with badges.”

A statement published on Sunday by a coalition of progressive activist groups said, “The over-policing of this weekend failed to rectify the damage of last year’s police stand down. That lapse resulted in injuries to dozens, the death of Heather Heyer, and irreparable harm to the moral fabric of our city.”

The relative calm of the UTR anniversary, enforced by hundreds of police, secret service, and national guards, can be interpreted as proving the view that the vile fascism which reared its ugly head last year has been effectively put down. It would be a mistake, however, to measure counterrevolutionary threats based on how much overt violence takes place on a given weekend. A more accurate picture can be developed from surveying the activities of both revolutionary and fascist movements over the past year and the state’s monitoring of each. 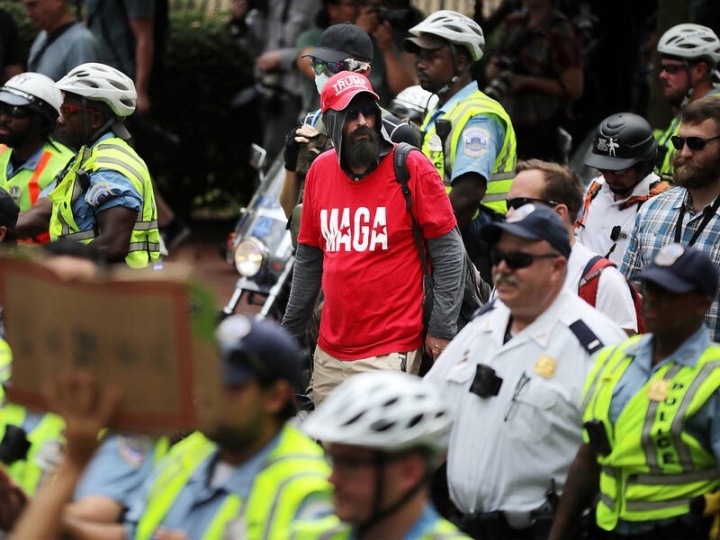 The 2017 UTR weekend was a watershed moment for white supremacists and fascists in the United States more than it was their beginning. As neo-nazi Matt Heimbach said in an interview, “[President Trump] opened up a door. His movement has opened up a door. It’s up to us to take the initiative.”

The original UTR attracted reactionary individuals from 35 states, but it was the organizations it attracted that fueled the violence that weekend. Vanguard America (now Patriot Front), the Rise Above Movement, and the Atomwaffen Division were a few groups in attendance who have a history of waging violence against the masses and added to that record in Charlottesville.

Members of these groups do not spontaneously decide to punch, beat, or stab the masses at events like UTR: they train and plan out these attacks deliberately. These coordinated assaults go largely unpunished by the state. Despite there being an abundance of photo and video evidence of organized racists and fascists committing criminal acts against the masses at the 2017 protests in Charlottesville, Huntington Beach, San Bernadino, and Berkley, only a handful of charges have been pressed.

Court documents from Jason Kessler’s lawsuit against the city of Charlottesville for denying him a permit to host another rally there reveal that law enforcement may be doing more than simply turning a blind eye to these groups. An email Kessler received from a person identified as “Neil” under the handle “lionofgod1488” claimed to have connections with D.C. police that would ensure UTR 2 went smoothly.

In stark contrast, the state has aggressively and purposefully persecuted communists, anarchists, and others over the past year. Before the original UTR, an intelligence bulletin from the Department of Homeland Security warned local law enforcement of a violent threat from the left more than the right. In cities like Kansas City, MO and Austin, TX, joint counter-terrorism task forces have arrested communists and their supporters with threats of serious jail time. Out of the two protests this past weekend, the four people arrested were part of the memorial rally for Heather Heyer in Charlottesville.

In light of the state’s prejudice against progressive and revolutionary movements, the need for increased militancy and better organization becomes clear.

The original Unite the Right rally was held in response to progressive calls to take down the Robert E. Lee statue on UVA’s campus as part of a countrywide storm against Confederate monuments. This anti-racist movement embodied militancy, with Confederate statues being torn down with chains, Confederate shrines being spray-painted with hammer and sickles, and Confederate flags being forcefully removed from their poles.

This revolutionary wave brought back the explosive energy that started with the Black Lives Matter movement. It borrowed from the rebellious courage seen at the Ferguson and Baltimore uprisings, where the masses defiantly retaliated against their exploiters.

Unfortunately, much of that revolutionary fervor was extinguished by nonprofits and liberal sell-outs from inside and outside the movement. Instead of militancy, these collaborators have spread non-confrontational and pacifist politics, making the movement as a whole vulnerable to counter-revolutionary attacks like the ones at the original UTR rally.

In the wake of the second UTR rally, the progressive and revolutionary mass movements must wrestle with some serious questions about how to move forward. Heather Heyer’s mother Susan Bro has emphasized in interviews and speeches that she sees it as her duty to pick up her daughter’s baton in fighting on the side of the masses.

In the context of combating fascism and racism in this country, picking up the baton cannot mean depending on spontaneous gatherings, peaceful demonstrations, and non-violent confrontations. It must mean struggling towards more organization, more militancy, and daring to go farther than ever before.